Have you been dreaming of certain things, waiting for certain promises to be fulfilled, longing to have certain prayers answered? Has it been years and nothing has changed, with no sign that it ever will? I have been given many promises by God, especially that many of my dreams and prayers would be answered. Some of them I have been waiting for more than 6 years. For other people, they may grown old and grey with all the waiting. Recently I learned in a study on “Love is Patient”, that there is a huge difference between waiting and patience. And the difference literally blew me away: Waiting often means that during the time that we expect things to be completed and come to pass, we sit around complaining, criticising, judging without taking the time to prepare for the thing we want / need, and might even along the way get so impatient and miserable that we try to solve the situation and make the dreams and promises come true in our own power and strength. It also means that we often blame other people for our miserable situation, and why we refuse to change and become better people – grow into maturity to handle that which we hope to have. Patience literally means to excitedly / joyfully look forward to the day of the promises being fulfilled, while preparing and making sure that everything is ready and in place to receive that which you have been patiently waiting for, while considering each day as one step closer to your prayers being answered, and your promises being fulfilled and your dreams coming true. Often times God loves us through patience by giving us the time and the chance to change in our personal lives, to sort things out and to get ready for the things that God has in store for you, or to heal the hurt and wounds and strengthen you.

I like to use the image of a story that someone once told me: Typical like most dogs, there was this little Jack Russell that loved to escape from his yard and chase after this one red Chevvy. For many days, which turned into weeks and became months, this Jack Russell kept chasing this car, hoping that one day he would be able to catch it. He often sulked in the backyard afterwards, thinking how awful it is that he just cannot catch that car. Finally, on a day, he saw the car and squeezed himself through the fence and ran after the car. To his surprise, he caught up with the car and actually got it right to bite the back fender. However, the Jack Russell had no idea what to do with the car, now that he was fast enough to have caught up and catch the car. He didn’t know what to do, so he let go of the car and never chased it again. 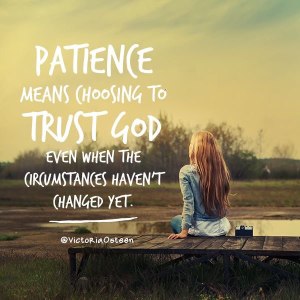 I realised that it is high time I pull up my socks andmake sure that everything is prepared and ready, that I wont end up like that Jack Russell.